A hymn for "boat people" 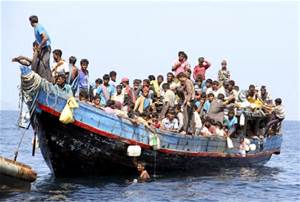 O God of mercy, at whose call
the ocean waters rise and fall,
protect the people on the sea
who from oppression seek to flee.
O hear us as our prayers we speak
for those who safe asylum seek.


They come from lands where tyrants reign
to seek a refuge from their pain.
They look to us to give them scope
to build a life of peace and hope.
O hear us as our prayers we speak
for those who safe asylum seek.


Yet politicians mock their plight
and commentators whip up fright.
Now let their noise and lies depart:
convert each demagogic heart!
O hear us as our prayers we speak
for those who safe asylum seek.


God bless this nation, “girt by sea”,
with broader hospitality.
May gen’rous hearts around this land
obey with love your great command.
O hear us as our prayers we speak
for those who safe asylum seek.

I wrote it with the hymn “Eternal Father, strong to save ...” (Together in Song, 138) in mind, with the repeated refrain: “O hear us as we cry to Thee / for those in peril on the sea.” As a result, the hymn is written with the tune Melita in mind.

While I write this hymn as a Christian, I’ve deliberately written it as a hymn that can be sung with integrity by Christians, Jews, Muslims, and other people of faith.

This hymn is available free-of-charge to any congregation, denomination, ecumenical gathering, or interfaith gathering who wishes to use it in worship, particularly in a service focusing on our response as people of faith to asylum seekers.
Posted by Bob Faser at 15:36