So where does Mark get off by saying that the Spirit “drove” Jesus to the place of temptation? I guess the traditional theological answer for this is found in the understanding that Jesus was radically different from you and I. Jesus, as God linked to humanity, needed to encounter and defeat temptation, just as he needed to encounter and defeat death. We, then, live in the light of Jesus’ victory. Many contemporary Christians still struggle with this answer, but I need to say that this is what the Christian church has said over the years.

Another point, just briefly, we need to remember that the word “wilderness” means something different in the Bible than it does for us in this part of the world today. We think of wilderness as something beautiful and inviting, a place of diverse life and lush growth, a place worth exploring, and a place worth protecting: such as large areas of Tasmania, and large areas of New Zealand. For many of us, the wilderness is a place where people experience their spirituality in a heightened sense.

However, the “wilderness” that the biblical writers refer to was a desert, the deepest part of the desert. It was a place that was popularly regarded as almost lifeless. It was seen by many as a place where God was profoundly absent. So, for Jesus to go into the wilderness, it wasn’t for an enjoyable - if challenging - bushwalk. It was much more.

Now this has a strange sound. “... He was with the wild beasts ...”. It almost sounds as if this was part of the hardship of the temptation, doesn’t it. At least that’s what I thought. But I was wrong. I checked this out in a couple of commentaries. It seems as if the wild beasts were a sign of hope: Jesus being present in the wilderness with all the animals. It’s evidently a reference to Isaiah’s image of peace reigning among the animals as a result of the reign of the Messiah.

The wolf shall live with the lamb,
and the leopard shall lie down with the kid,
the calf and the lion and the fatling together,
and a little child shall lead them.
The cow and the bear shall graze,
their young shall lie down together;
and the lion eat straw like the ox.
The nursing child shall play over the hole of the asp,
and the weaned child shall put its hand
on the adder’s den.
They will not hurt or destroy
on all my holy mountain;
for the earth shall be full of the knowledge
of the Lord
as the waters cover the sea.

The classic illustration of this passage was in a series of paintings by Edward Hicks, an American Quaker artist of the early 19th century, showing a variety of animals, both the hunters and the hunted, resting contentedly in each others’ presence. 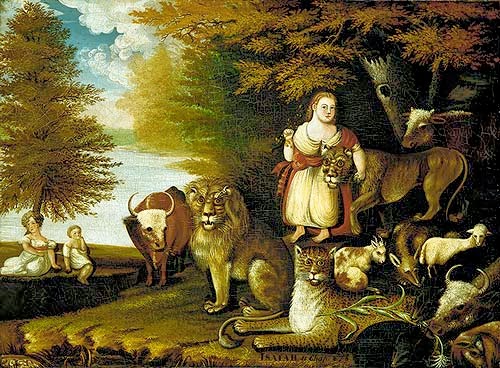 The wild beasts are a sign of the greater unity that Christ was bringing about, a unity that can even incorporate the world of non-human nature. This is a promise that the Christian church has been slow to grasp over the centuries, but it is part of the faith we have inherited.

We hear a glimpse of this in the old Jewish Dreaming story of the Great Flood, about God’s rainbow covenant with humanity and with creation. God promised protection both to humanity and to the non-human creation. The rainbow was the sign of God’s promise to “every living creature of all flesh”.

Both the Hebrew Scriptures and the New Testament point us in the direction of God calling us to see our life in closer relation to the world around us.

This again, is an interesting image. Previously, when reading this passage, I had the impression that the reference to the angels waiting on Jesus spoke of something that happened after the temptation. Jesus endured his temptation and, thus, - as a reward for his endurance - the angels came and waited on him.

But the lesson doesn’t say this. The three things that happened to Jesus in the wilderness; the temptation, being with the wild beasts, and the angels waiting on him: there is no indication that they happened in any particular order.

I believe that the three things happened at the same time.
Perhaps - just perhaps - this may be why the Spirit “drove” Jesus into the place of temptation:
“... and the angels waited on him....”

Jesus endured his temptation and set out on the road that eventually led to Calvary. During this season of Lent, may we follow where Christ leads, so that we may pass through the pain of the cross to the celebration of Easter morning.

"And the Spirit immediately drove ... [Jesus] ... out into the wilderness. He was in the wilderness forty days, tempted by Satan; and he was with the wild beasts; and the angels waited on him."

Posted by Bob Faser at 08:00 No comments: Links to this post

Email ThisBlogThis!Share to TwitterShare to FacebookShare to Pinterest
Labels: Year B Sermons

A few months ago, I read an article by a writer named Thom Schultz on "The Rise of the Dones".    A number of my colleagues have also read this article, shared it, and commented upon it on social media.

The basic premise of Schultz's article is that there is a group of people leaving active involvement in their congregations (and active involvement in the Christian church generally) who haven't lost their faith, who haven't changed either their religion or their denomination, who are not actively alienated from their congregation or their denomination, and who are not leaving their church as a result of a dispute of any sort.

I have many friends and acquaintances who are "dones".
But now they're done.

I believe that a big part of the issue, here, is the fact that so many churches, particularly among the middle-of-the-road "Protestant" denominations (i.e., Uniting Church in Australia, United Church of Canada, Methodist, Presbyterian, and Congregationalist churches in other countries ....), so many churches operate from a strongly "teaching-learning" model for the times the congregation gathers for worship.

In today's world, if a person wishes to attend a worship service in a church (or other faith community), it's not because she/he wishes to learn things about religion.  People attend worship because they wish to experience the Sacred, because they wish to encounter the God worshipped by the faith community.  In my experience, the churches which are declining the fastest are also the churches that are the most wedded to the teaching-learning model for church life, and this applies to congregations of a variety of theologies and worship styles.

A congregation can be so conservative in its faith as to be almost "fundamentalist", so "progressive" in its faith as to be almost agnostic in any practical terms, or (preferably) somewhere in the middle.  If there is nothing more in its Sunday morning gathering than a teaching-learning event under the guise of worship, that church is probably producing more than its share of "Dones".  This applies whether the teaching-learning gathering takes the form of a 1950s "preaching service", a 1970s "all-age family service", or a 1990s "fresh expression".

Part of the issue is that, even though our learning never ends, our schooling does end.  People transition from Kindergarten to Primary School, from their Secondary Education to University.  But whether you're a high school drop-out or a PhD, we all conclude our formal schooling at some time in our lives.  Churches with a strong teaching-learning model for what happens on Sunday morning will produce plenty of "church drop-outs" and "church graduates".  Many of these will continue to view their former church with great affection, returning for major celebrations in the same way that they would attend a high school or college reunion.

I believe that the way to prevent good church members from becoming "Dones" is to ensure that there is far more in their Sunday service than merely teaching and learning, and a greater opportunity to actually encounter God.   For some denominations such as the Uniting Church (for example), this could mean that some of their congregations "feel" Russian Orthodox while neighbouring congregations may "feel" Quaker or Pentecostal.  If that's the case, I think this may be a good thing.
Posted by Bob Faser at 15:32 3 comments: Links to this post