“A Dalek-shaped god or a Jesus-shaped God?: The choice is yours.” (a sermon)

The scripture lesson on which the sermon is based comes from Paul’s letter to the Galatians, and is a combination of parts of two weeks’ readings from the lectionary. 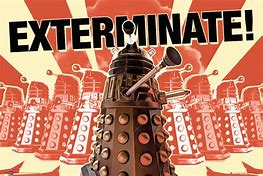 I’m not a science fiction enthusiast.  Murder mysteries are my guilty pleasure.


While I’m not a science fiction enthusiast, I enjoy watching the occasional episode of “Doctor Who”.  Anyone who’s ever watched any episodes of “Doctor Who” would know of the Daleks, who are Doctor Who’s enemies par excellence.  The Daleks are creatures which are part-living beings and part-machines.  They look like vacuum cleaners on steroids, and have a large gun-like contraption where their noses should be.


The Daleks are not merely out for world domination, but for universal domination, and are willing and able to destroy anything that stands in their way.  Whenever the Daleks are on the march, their war cry is always the same:  “Exterminate!  Exterminate!” 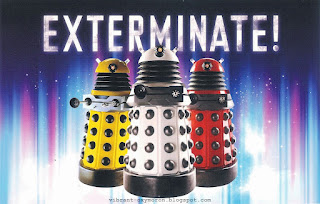 Sadly, many of our neighbours think that the God we worship as Christians is a Dalek-shaped god, a petty little small-g god whose attitude toward most of humanity is one of condemnation.  They believe that we worship a god with an attitude of “Exterminate!  Exterminate!” toward anyone who doesn’t measure up to an impossible standard of perfection in their behavior.  That’s one of the main reasons why you wouldn’t find some of our neighbours in Church in a pink fit.  Who in their right mind would want to worship that sort of god?


This is the God of whom Paul writes in the letter to the Galatians, … the God in whom our human demographic differences become matters of enrichment and diversity rather than issues of destructive divisiveness, … the God who calls forth a collection of generous and inclusive virtues among his worshippers.


The alternative to a Dalek-shaped god is the God whom you and I already worship.


We need to let our neighbours in on this secret.  The alternative to a Dalek-shaped god is the God whom you and I already worship.  But that won’t be easy, for three reasons.


It’s a bit like the way the purveyors of junk food and fast food advertise theirs wares constantly, while the producers of healthy food rarely advertise.  You’ll see a lot of ads for McDonald’s on TV, but very few ads for broccoli.  Similarly, the purveyors of junk religion bang on about their faith, while those of us who embrace a healthy religion often keep it to ourselves.


2.  The second reason is that the notion that all people in churches worship a god of “Exterminate!  Exterminate!” is far too ingrained in our culture.  (There’s the prevailing cultural stereotype about churches.  It used to be that the churches were full of wowsers and hypocrites.  Now, we’re full of wowsers, hypocrites, and paedophiles,) These stereotypes make it far easier for our neighbours to jump to the comfortable conclusion that’s there’s nothing in the churches that are relevant to their lives in any positive way.  It’s good to undermine this notion, but it won’t be easy.


3.  The third reason is, if we seek to let people in on the secret that we don’t worship a god of “Exterminate! Exterminate!”, we run the risk of being openly critical of those who do worship such a godlet.  We’re all far too “nice” to be fully comfortable in conflict.  We’ve often seen our faith calling us to follow the “gentle Jesus meek and mild”, the one who wants us (dare I say it?) to be his “sunbeams”.


Many of us have been critical of the overly argumentative Paul, even when he does come up with some important affirmations about inclusivity, compasssion, and love.   (And it’s interesting to note that in the same letter we’ve read parts of today, Galatians, with its strong affirmation of inclusivity, is also a letter in which, at times, we find Paul at his grumpiest.)


If we let our neighbours in on the secret that a Jesus-shaped God is a better God to worship than a Dalek-shaped one, we’ll come across as argumentative to those who are committed to worshipping a Dalek-shaped god.  We’ll cop some flak.  But the flak will be worth it.


In the 1980s, Adrian Plass wrote a series of screamingly funny books about a British congregation.  One of the members of the church was a man named Leonard Thynne, a sporadically recovering alcoholic who grew up as part of a rigid Brethren-like sect.  One Sunday, the congregation had a visiting preacher, a monk.  Leonard’s reaction to the monk’s sermon was this:  “He worships a different God to the one I grew up learning about.  His God’s nice!”


May we enable our neighbours to say the same thing about the God we worship.
Posted by Bob Faser at 14:23 No comments: Links to this post