Despite all the solemn noise from conservative commentators about a "war against Christmas" waged (in their imaginative opinion) by secularists, multicultural enthusiasts, and the generally "politically correct", the one time when Christmas was banned in the English-speaking world was the result of the actions of ultra-conservative Christians.  As a result, in fact, there was a long period when people in English-speaking countries didn’t really celebrate Christmas.
It all began during the time in the seventeenth century when Oliver Cromwell ruled England. Like any leader of any government, Cromwell did some good things, some bad things, and some silly things.
Cromwell and his supporters practiced a very dour, austere, narrow version of their faith and they wanted to impose a similarly dour, austere, narrow religion upon everyone. In today’s language, they’d be called “fundamentalists”. They were very suspicious of Christmas, as it was, on the one hand, a major Christian celebration and, on the other, a lot of fun for people as well. And as we all know, there really isn’t a lot of “fun” in fundamentalism.

Unless Christmas Day happened to fall on a Sunday, it was illegal during the time of Cromwell’s government to close a shop or open a church on Christmas Day. Parliament met and courts sat on the 25th of December. Families who celebrated Christmas did so in secret, for fear of being fined or jailed.
There were demonstrations, of a sort, against these laws. People protesting the laws against Christmas would go out at night and decorate public buildings with holly and other Christmas greenery.
Some historians have said that Cromwell’s laws banning Christmas were a major factor in turning popular sentiments in England away from Cromwell’s Puritan republic back to the royal house of Stuart. A public meeting in Kent passed a resolution saying, “If we can’t celebrate our Christmas Day, we would have the King back on his throne.”
Cromwell died. Cromwell’s son tried to rule for a while, but Charles II soon became King. After Cromwell, the laws against Christmas were repealed, but many people in Britain were already out of the habit of celebrating Christmas. Christmas became less and less important a celebration through the seventeenth, eighteenth, and early nineteenth centuries. As a result, it's important to note this little-known fact: During the period when Handel wrote “Messiah”, when the Wesley brothers were engaged in evangelizing the British working classes, when the United States achieved its independence, and when the British established their first colonies in Australia: during that lengthy period, the 25th of December was just another day on the calendar.
It was only during the middle of the nineteenth century when Christmas as a major celebration for churches, families, and the wider community began to take the familiar shape we now know in Australia and other English-speaking countries. This change took place as a result of:
I'll give a few examples of how these changes took place.
The Christmas Tree: The Christmas tree was a German custom which was popularised among the middle classes in Britain (and in the British empire) largely because of pictures in magazines of Queen Victoria and her family with their Christmas tree. In America and Australia, it was popularised because of German immgration. 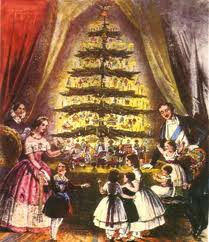 Scrooge: Charles Dickens’s novel “A Christmas Carol” told the story of Ebenezer Scrooge’s transformation, which one later writer described as a “secular spiritual conversion”. This gave the Christmas season the sense of a time of profound human transformation; an idea that has continued in many later books, films, and TV specials. (One example is Dr. Seuss’s children’s book “How the Grinch Stole Christmas”.) The Christmas season itself was seen as having the potential of calling forth our better nature, as it did for Scrooge, or for the Grinch, or for ... many others. 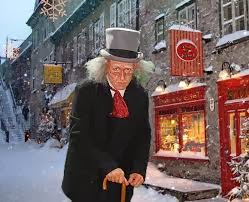 Santa Claus: The figure of Santa Claus, as we know him, developed in the nineteenth century as a combination of Dutch, English, and American influences, particularly the Dutch celebrations of St. Nicholas.
St. Nicholas was a 4th century Christian bishop and saint in Asia Minor (present-day Turkey) who came from a wealthy family and who was well-known for his generosity. One story about St. Nicholas involved a poor family who contemplated selling their children as slaves. St. Nicholas went to the house at night and threw money in through the window, so the children didn’t have to become slaves. St. Nicholas became the patron saint of just about everything: the Netherlands, Russia, children, sailors, pawnbrokers, people who have been unjustly imprisoned, and the cities of Galway in Ireland, Aberdeen in Scotland, and New York in the United States.   (He shares his patron saint gig for New York City with St. Patrick.)  As well, in his role as Santa Claus, he’s also the patron saint of reindeer drivers, last-minute Christmas shoppers, bearded men, employers of elf labour, and overweight people who still think they look good in red.
In the Netherlands, St. Nicholas’ Day (6th December) is a major celebration, including gifts for the children brought by the saintly visitor, who breaks into homes by the windows to bring gifts to the children, just as the original St. Nicholas threw money into the window of the poor family. He is depicted by the Dutch as wearing the vestments of a bishop, and riding in a carriage or sled pulled by a team of horses. 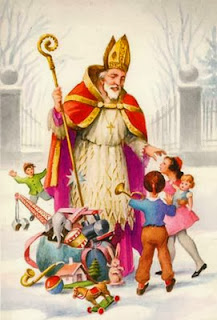 In the nineteenth century, Clement Clarke Moore, an Anglican priest and theological professor in New York, wrote a poem for his daughters entitled “A Visit from St. Nicholas”: “’Twas the night before Christmas, and all thought the house, not a creature was stirring, not even a mouse, etc.” In Moore’s poem, St. Nicholas came to bring gifts, but appearing somewhat differently from the traditional Dutch St. Nicholas.
Thomas Nast, a famous nineteenth century American cartoonist, added to the contemporary picture of Santa Claus in a series of newspaper and magazine cartoons. He gave the midnight visitor an address at the North Pole, a plentiful supply of elf labour to make toys, and a predominantly red colour scheme for his clothing. He also helped standardise the name “Santa Claus” in English usage from the Dutch pronunciation of St. Nicholas.  (Nast was also known for giving the two major political parties in the US their animal symbols, the donkey for the Democrats and the elephant for the Republicans.  You may note that there are far more asses among the Republicans today than there were in Nast's day.)
A series of magazine advertisements for Coca-Cola from the 1920s until the 1950s drawn by a commercial artist named Haddon Sundblom standardised the visual image of Santa Claus, and Coca-Cola red as the exclusive colour of his clothing, at least in the English-speaking countries. (It is possible, though, to find European Christmas decorations in which Santa Claus wears blue, green, or purple clothing, as well as red.) 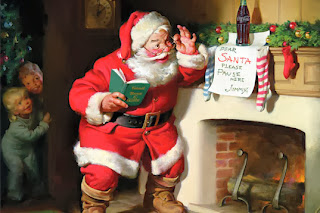 
And, if you'd like some of my reflections on Advent and Christmas sitting on your bookshelf as well as on your computer, you may want to buy my book  Christmas Lost and Christmas Regained from Amazon.