Those "My Family" stickers: do they bring out the "Grumpy Cat" in you, too?

The other day I saw a sticker on a car.  The sticker showed the familiar face of "Grumpy Cat", and declared "Grumpy Cat doesn't care about your stick figure family." 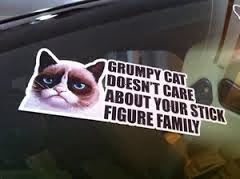 Has anyone else given a thought to those stickers that seem to be found on cars everywhere?  The stickers have the heading "My Family" and show a number of line drawings of people, usually engaged in leisure pursuits, representing the family members of the person owning the car.  They're printed to order.  Occasionally, a sticker is printed to make a sarcastic, cynical, or (occasionally) downright rude statement, but most of the time, the sticker (like the one below) is a sincere symbolic portrayal of the person's family engaged in some of their recreational interests. 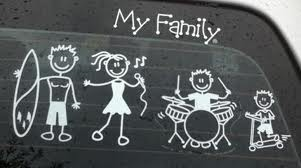 One good thing about these stickers is that the family depicted on the sticker can vary, depending on what the person ordering the sticker chooses.  As I said, the sticker is printed to order.  It is not dependent on any pattern other than that of the person driving the car.  It does not have to conform to the family patterns of families on television comedies.  Neither does it have to conform to the type of family some politicians think of when they use the phrase "family values".  A single-parent family can have a sticker for their family.  A childless couple can have a sticker.  A same-gender couple can also have a sticker, as can a person whose family is a houseful of pets.  The availability of figures with halos and wings makes it possible to recognise, include, and honour deceased family members.

There is one factor I find curious about these stickers.

This seems very odd to me.

Most of the adults I know are seriously "into" their work ... not as "workaholics", but in a creative and positive way.  They see their work not merely as a means to earning money, but as a major source of personal satisfaction, and as a way in which they contribute to the well-being of others.  Even if they are frequently frustrated by aspects of their work, they find their work to be profoundly meaningful.

And the majority of adults I know have a similar feeling about the significance of their involvement in various volunteer-based organisations (religious congregations, service clubs, political parties, other community groups ...), even if they sometimes complain about the implication of their involvement on their free time.

Most of the children and young people I know are seriously "into" being students.  They enjoy their education, not only because of the hope that it will lead to good employment in the future, but because of the fact that education opens up their perspective on the wider world.

Thinking of the family on the sticker earlier in this article, the woman holding the microphone may be many other things than merely a person who enjoys singing karaoke.  She may be married to the man with the surfboard, and be the mother of the boys playing the drums and riding the scooter.  She may also be a daughter, a granddaughter, a sister, a daughter-in-law, a sister-in-law .....  She may work as a journalist.  She may be an active member of her local synagogue and her local Rotary Club.  But, rather than any of these other possibilities, as far as the "My Family" sticker is concerned, she's merely a karaoke enthusiast.

Now, there's nothing wrong with karaoke.  BUT .... (and I hope I'm not being too curmudgeonly here) I am concerned that the popularity of these stickers may be a sign of a growing social trend.
Or am I just becoming "Grumpy Cat"?
Posted by Bob Faser at 07:15

Email ThisBlogThis!Share to TwitterShare to FacebookShare to Pinterest
Labels: Culture