It's an honour to be called a "bleeding heart".

About a month or so ago, I read a recent article in "Eureka Street" by Andrew Hamilton.  He wrote about the term "bleeding heart".  He drew a connection between this phrase and the pictures of the Sacred Heart used in some popular Roman Catholic religious art. In this picture, we see an image of Jesus pointing to his heart, which is visible outside his clothing.  The heart is surrounded by a crown of thorns, causing a drop of blood to drip from the heart.  Flames rise from the top of the heart. 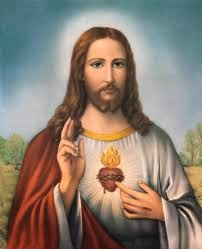 The picture is a popular image in Catholic devotional life.  Growing up in a community (Bayonne, New Jersey) where the majority of people were Catholics, I've seen this picture in many Catholic homes, both in homes where the people were conventionally devout and in homes where the level of practice was more minimal.
Hamilton compared the use of the phrase "bleeding heart" to this picture of the Sacred Heart.  I must say that whenever I've heard the phrase "bleeding heart", I've also instinctively thought of this picture, and I'm not even Catholic.
Hamilton says that the term "bleeding heart" is normally used by people who "dismiss ethical arguments" when considering social and political issues, such as our response to the plight of asylum seekers.  (In my own observation, those who use the phrase "bleeding heart" frequently tend to be people who combine a populist political conservatism with a non-religious - and sometimes a stridently anti-religious - world view.  Conservative religious people - whether Christian or otherwise - are less likely to use the phrase "bleeding heart" as an insult.)  People who use the phrase "bleeding heart" use it to describe those whom they believe are "guided by emotion, not by reason" (Hamilton's phrase) in expressing compassion to those they feel are "undeserving" of the compassion.
In all of this, the comparison with Jesus, particularly during Lent, is striking.  Showing compassion to the "undeserving" is exactly the sort of thing Jesus did, both throughout his life and in his Passion.   For a Christian, to be called a "bleeding heart" means that (if you use the language of some of my evangelical friends) you've successfully asked yourself the WWJD question ("What would Jesus do?") in terms of the issue at hand.  In the language of classical ecumenical Christian spirituality, you're participating (at least partially) in what Thomas a' Kempis called "The Imitation of Christ"
Two final points:
1.  I believe that that any society in which such phrases as "bleeding-heart" or "do-gooder" are used as insults is a society in grave ethical and moral trouble.  When people are mocked for being "too compassionate" as if it's a character flaw, a crime, or a sin, the community is on its way to becoming one in which the only law is the law of the jungle.
2.  If someone calls you a "bleeding heart", thank them.  (Particularly if you're a Christian, they've paid you the great honour of comparing you to Jesus.)  Thanking them may help them think about the implications of what they've said.  At the very least, it will freak them out.
﻿
Posted by Bob Faser at 14:43