The ethics of the Trinity 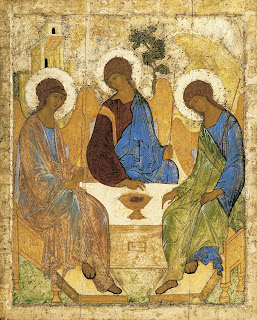 
This all teaches us an important lesson.  While our Christian beliefs begin with the scriptures, they can never end there.  Something as central to the Christian faith as the Trinity is not found in any significant way in the Bible.  I’ll be very Wesleyan here and say that our beliefs as Christians are the result of the interaction of Scripture, our church traditions, our reason, and our varied experience.
Anyway, back to the Trinity, a classic depiction of the Trinity, an image that has been rediscovered by many Christians in recent decades, is found in an old Russian icon by Andrei Rublev:  I have a copy of this icon over my desk.  It’s shown at the beginning of this blog.  Like many icons from the Orthodox tradition, Rublev’s icon is about two things:
·         The first thing is the story in the book of Genesis of Abraham offering hospitality to three strangers, who announce the startling news that Sarah is to have a child in her old age.
·         The second thing is the Trinity:


The connection between the story from Genesis and the Trinity sounds pretty far-fetched to us now, but that is how many Christians interpreted that passage at the time when Rublev painted his icon.  It was a much less critical age than the one in which we live.  In those days, many Christians regarded the three strangers in the Genesis story as a symbol of the Trinity.
Looking at this icon, some things may strike us.
·         In the icon, there are three distinct figures sitting around the table, representing the three distinct identities of Father, Son, and Holy Spirit.
·         Each figure has the same face as the others - a youthful face that can be the face of a person of either gender.  The single face represents the one central reality of the living God.
·        The three figures together form a circle, representing the profound unity of Father, Son, and Holy Spirit within the living God.
·         There is a fourth place at the table.  The dynamic love of Father, Son and Holy Spirit within the living God draws the world, the worshipper, you and I, into the picture to share the banquet.  The love of Father, Son, and Holy Spirit for each other overflows into a creative, self-sacrificing love for the world.


Now, thinking of this overflowing, creative, self-sacrificing love of Father, Son. and Holy Spirit, how does this help us in our lives to follow the ethics of the Trinity?  I have three ideas I’d like to share.


1          Firstly, within the Christian Church, there are three main branches:   Protestant, Roman Catholic, and Eastern Orthodox, a Trinity of Traditions, if you will.  Can we say today, within the life of the Christian Church, that the love of Protestants, Catholics, and Orthodox for each other overflows into a creative, self-sacrificing love for the world?    (We are doing a lot better in this regard than Christians did fifty years ago, but there is still a long way to go.)


2.         Secondly, within the wider people of God, we find further possibilities.  One of the names of the Rublev icon is the Icon of the Hospitality of Abraham.  There are the three Abrahamic faiths, the three faiths that trace their heritage back to Abraham’s journey of faith: Judaism, Christianity, and Islam.
We need to be cautious here.  For both Jews and Muslims, the idea of the Trinity poses a real problem.  Judaism and Islam are both much more radically monotheistic than Christianity.


But, using a bit of poetic license, we still can see a Trinity of Faiths.  Can we say today, that the love of the various faiths for each other overflows into a creative, self-sacrificing love for the world?   (If anything, it seems at the moment like a cruel joke to even suggest it.)


3.         Thirdly, how about something a little less “religious”.  Here in Australia, we have a Trinity of Cultures:
·         We have the indigenous people of Australia, the Aboriginal and Torres Strait Islander peoples, ancient custodians and stewards of this land, people for whom this land is profoundly sacred.

·         We have the Anglo-Celtic “settler” culture: those who came from England, Scotland, Ireland, Wales, Cornwall, and other English-speaking lands (not to forget their descendants over the generations); bringing language, laws, and a range of institutions that - for better or worse, probably a bit of both - have made up the dominant culture from 1788 through to the foreseeable future.

·         We also have the migrant communities: those who in recent decades have come to this land bringing their skills, their cultures, their faiths, and their cuisines, who have enriched this land immeasurably, who have helped to make Australia a far better nation (even in the face of massive prejudice).  Not the least of the ways they have enriched this land is seen in the fact that today in Australia you can get a decent cup of coffee in even the smallest country town.

In Australia, we have a Trinity of Cultures.  Can we say that in contemporary Australia that the love of indigenous, settler, and migrant Australians for each other overflows into a creative, self-sacrificing love for the world?

The word of hope is that this overflowing love of Father, Son, and Holy Spirit invites us to attend God’s Trinitarian party, to share God’s banquet of love.
Posted by Bob Faser at 15:22