You may remember the words of the old rock and roll song from the early 1970s:

Clowns to the left of me, jokers to the right,
Here I am, stuck in the middle with you.

In many ways, this is the experience of mainstream churches in twenty-thirteen.

It’s not an easy task.   Those of us whom God calls to inhabit the “messy middle” need to cope with the grey areas of less theological, ethical, or moral certainty.

Our lessons for this Second Sunday of Advent give us some clues for the task ahead of us.

In our gospel lesson, we see the figure of John the Baptist.  John was a person with a highly austere lifestyle.  (Today, we could say that John has scored the austerity trifecta:  vegetarian, teetotal, and celibate.)  He also had an uncompromising message of God’s requirements for those who would enter his Kingdom.

Jesus never embraced the austerity of John’s lifestyle.  Jesus proclaimed a much more inclusive vision of God’s kingdom than did John.  But Jesus still spoke of John the Baptist with great respect.

The average member of the people of God is not called by God to embrace all the austerities of John the Baptist.  But, in every generation, including our own, the people of God need a few of the direct “in-your-face” prophetic types such as John.  This is so, whether they exist on the “left” or the “right” of the theological spectrum.  They help keep the rest of us on our theological toes; whether they call us to a greater boldness in sharing our faith or to a greater boldness in working for social justice.

However irritating they may be at times, we need our John-the-Baptist-types.

But the people of God also need those who challenge the “in-your-face” John-the-Baptist types to ease up, to lighten up, to seek a more humane balance in their faith.

In our lesson from Romans, we see something very different from John the Baptist.  On one hand, Paul wrote as someone who loved his own tradition deeply:  “For whatever was written in former days was written for our encouragement, so that by steadfastness and by the encouragement of the scriptures we might have hope.”

Paul was being a very contemporary person of faith here.  Theologically, Paul showed himself as an inhabitant of the “messy middle”, as one who loved his tradition passionately but who saw the task of inclusion as an urgent priority.

It’s not an easy task inhabiting the “messy middle”

Isaiah’s vision in our first lesson proclaims to us that all these difficulties are well worth it.  Last week’s lesson had one of Isaiah’s great visual images of swords being hammered into ploughshares; spears being bent into pruning-hooks; weapons of death becoming tools for life. 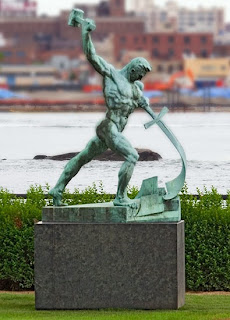 Today we have another of Isaiah’s great word pictures.  The profound peace of God extends into the animal kingdom, so that all the creatures of the earth shall lie down together in peace and harmony.

The wolf shall live with the lamb,
the leopard shall lie down with the kid,
the calf and the lion and the fatling together,
and a little child shall lead them.

In the early 19th century, an American Quaker artist named Edward Hicks painted a series of many paintings on this passage.  He gave the series the name “The Peaceable Kingdom”.  The paintings were in a naive, almost primitive style, with the animals having a human quality to their faces, looking rather philosophical – as if they were pondering the mysteries of life at a Quaker meeting.

The paintings capture the radical nature of Isaiah’s vision. 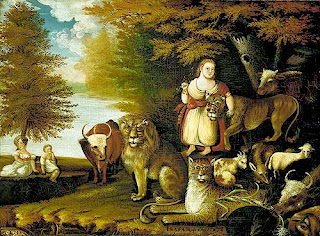 We still hear this vision of God’s peace breaking out in God’s world.  With the vision, we also have God’s call to keep struggling as God’s people in the “messy middle”.

It’s not an easy task.   Those of us whom God calls to inhabit the “messy middle” need to cope with the grey areas of less theological, ethical, or moral certainty.  In the midst of these grey areas, we can discover the good news of God’s inclusive love for the whole creation.

Clowns to the left of us, jokers to the right,
Here we are, stuck in the middle ... with God.

(1)   The notion of the "Messy Middle" to describe those of us committed to a mainstream, ecumenical faith is not original to me.  In particular, Avril Hannah-Jones is one person who has worked with this idea recently.
Posted by Bob Faser at 14:05

Email ThisBlogThis!Share to TwitterShare to FacebookShare to Pinterest
Labels: Advent-Christmas, Year A Sermons